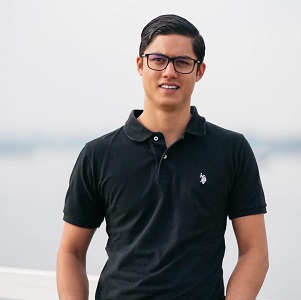 That’s the chorus of advice you hear from all the marketing experts.

But what do you send someone after they join your list?

That’s what we’re diving into in this episode with Daniel Throssell of PersuasivePage.com.

Daniel is a copywriter and has been called “The best marketer in Australia” by a prominent client of his.

His journey started as a side hustle while working 12-hour shifts as an electrical engineer. Daniel started using any spare time he had and a special way of writing proposals – and landed high paying jobs from week 1.

It wasn’t long before he was charging $200/hr and up, working with the bestselling author in Australia, and he now has his own audience he writes emails to daily.

Who Is Email Marketing For?

“What email is really good for especially, is that you can dig up repeat business,” Daniel told me.

A lot of people working with clients finish their contract and part ways. However, if you have their emails, you have an asset, Daniel explained.

You can start to build a relationship with those clients. Emailing them to let them know you’re available, contacting them a year later when they’d need your services again, and so on.

“If you can write good email copy, you can drive sales whenever you want,” Daniel explained.

Before you can start sending emails to your list, you need people to sign up. The best way to do this is often by offering some form of lead magnet.

First of all, Daniel said lead magnets work. It just depends on who you are, what you do, and finding the right lead magnet for your audience.

“If you can solve someone’s problem, they want what you have,” Daniel told me.

The best lead magnets solve a pain point. If you know a lot of your audience has a particular problem, create something to address it.

For example, if you’re in the dog training niche and training a dog not to soil on the carpet is a typical training issue, Daniel said you could create a lead magnet called the Top 5 Ways To Stop Your Dog Soiling Your Carpet.

A good lead magnet is short, targeted, and easy to consume Daniel added. You want people to take action as soon as they get hold of your lead magnet.

The way Daniel approaches this is with three kinds of emails:

He elaborated on each of these types of emails as follows:

It all starts with a welcome email. To write a good welcome email, Daniel said, “Over everything else, you need to be you”.

By this, he means loading up your email with your own personality. This is the best way to stand out from the crowd, grab someone’s attention, and make them want to hear more.

A couple of other tips Daniel shared are:

“One thing that I do is always tell stories about things that are going on in my life,” Daniel said.

Daniel worked with Australia’s bestselling author for several years, and he taught Daniel an 8-word lesson.

That lesson was, “make characters of the people in your life.”

Daniel incorporated this into his emails. He often mentions his wife, kids, and even some of his friends when writing regular emails to his audience.

All while incorporating copywriting tips, of course. He said people love personal stories and he’s had a lot of positive feedback from doing this.

“The more you email your list, the better,” Daniel said.

That’s a controversial view, and you may be thinking you don’t want to hear from a company every day.

But Daniel said that if you’re the funniest person in their inbox and if you’re sending them great emails that they enjoy reading — it won’t be a problem.

What Emails Are You Sending After the Initial Sequence?

Daniel has 17 of his best emails scheduled in an autoresponder series to go out to new people signing up to his list.

On top of this, he also sends out an email every day.

Daily emails are not going to work for everyone. You may not have the time or enough things to say, but Daniel said this is what works best for his audience.

Plus, being a copywriter, writing emails comes naturally to him and it doesn’t take him long to write them.

Writer’s block can strike with email copy just as it can writing a novel. Especially if you’re sending out daily emails as Daniel does.

Daniel said the most used app on his phone is his notes app. He’s constantly jotting down ideas throughout the day as and when they come up, and this keeps a healthy list of ideas ready.

This way, instead of sitting down and brainstorming for an hour for a good topic to write about. Daniel said he always has at least 5 topics ready, and he’s been thinking about them for days already.

Telling stories for engagement is one thing, turning people reading your emails into customers is another.

Daniel said his emails have 3 parts to them:

Another tip Daniel shared is; if you’re struggling to come up with things to write about, make a note of any questions you receive from your audience as they come up.

Even if it’s a question you wouldn’t have thought was relevant, if someone is asking, Daniel said it is very likely other people have the same question.

The reason this works so well is that it’s based on the psychology of talk show radio, letters to the editor, or comment sections under news articles.

Daniel said humans are hard-wired to want to know what other people are interested in. If you start your email with, “A reader wrote in asking me the following question…” it’s going to hook people in.

Daniel sells in every single email he sends out. He always recommends people set that expectation early. This way, their audience becomes accustomed to being offered or reminded about the services you’re offering.

He said it’s no different than going to a supermarket or a brick and mortar store. You expect to see things for sale every time, it’s not going to turn people away.

There are times when you’ll want to push the sale harder. Such as when you’re releasing a new product, promoting a sale, etc.

To do this, Daniel said there are two things he recommends. Both of which can be done by tweaking your normal emails:

Daniel also said you should try and up the frequency when selling (unless you’re already sending one email per day), and keep the fun, personable tone to your emails.

Daniel’s #1 Tip for Side Hustle Nation

“Your personality is like a cowbell, you need to add more.”

Bonus Round: Becoming a Copywriter

How Did You Become a Copywriter?

Daniel didn’t have the most conventional path in copywriting. It all started in 2015 when Daniel saw a copywriting contest being held by bestselling author Ramit Sethi.

The contest was to write a sales letter to persuade people to attend a webinar. Daniel said he had never even heard the word “copy” in the context of writing at the time, but he decided to write a submission.

He wrote what he calls a “crappy little sales letter”, called “How I Got My Wife To Let Me Spend $200 on One eBook” and posted it on Facebook.

Daniel ended up winning the contest and won a 30-minute consultation call with Ramit. Ramit gave him some general tips, as Daniel wasn’t actually a copywriter at that point.

This led to Daniel looking for copywriting jobs on Upwork. Daniel came up with a good way of landing jobs on the platform within a week without having any experience.

He would research the companies looking for copywriters. Find out what they’re about, and send them examples of his work. Basically making his proposal to fit their job descriptions, and they’d be impressed and hire him.

Daniel would then go the extra mile and overdeliver. He would send the copy requested in the job, along with keyword research analysis, taglines, and anything else he thought would add value.

He kept doing this and upping his rate. Within a year, Daniel was charging $200/hr and was one of the top-rated copywriters on Upwork.

This led to being approached by clients to work on large projects, and eventually starting his own email list and building an audience.

This was all while working 12-hour shifts on an off-shore oil rig as an electrical engineer!