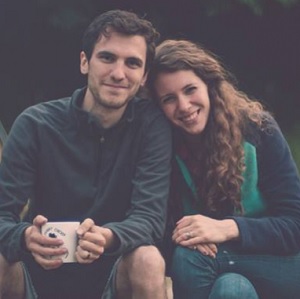 “It was costing me money to go to my job,” Nate told me.

That was a year after Nate and Alysha Jackson started their Amazon FBA retail arbitrage business — with just a $100 investment.

Since then, the former public school teachers have sold over $1 million worth of products on Amazon!

Amazon FBA retail arbitrage is the art of buying low locally and online, and reselling for a profit on Amazon.

After hearing about the opportunity on Side Hustle Nation, they turned that $100 in initial inventory into more than $180,000 in total sales in 12 months. It didn’t take much longer than that before they both quit their jobs to focus on the Amazon business and their growing family.

Getting Started With Amazon FBA

“We sell a lot of different things. Back when we were first starting Amazon FBA, one of the big challenges was spending all of our budget,” Nate told me.

That was until they started selling clothing, and bras in particular.

Nate and Alysha explained there are a few benefits to selling clothing on Amazon (outside of being able to spend their budget quickly).

First, clothing is not a “gated” category. That means new sellers don’t need Amazon’s approval to sell most types of clothing items.

Second, clothing requires a little more care when packaging. This deters some sellers looking for a quick and easy turnaround.

And with so many different styles, colors, and items of clothing, there’s less competition for the Buy Box on any individual product.

Nate and Alysha have homed in on buying most of their clothes from Kohl’s.

To an outsider, Kohl’s looks expensive. But as they explain, there is a lot of opportunity to stack discounts when buying in bulk from Kohl’s.

Nate and Alysha are members of Facebook groups dedicated to sharing Kohl’s coupons and discount codes. They also keep an eye on their website for sales and have become experts in knowing when discounts will be available.

Nate told me, “There are at least 8 different layers of discounts you can stack on almost every purchase that you make at Kohl’s.”

They’ve even made a Kohl’s discount calculator, which you can download from their site here.

Any Issues Buying a Large Number of Items at One Time?

There was one occasion when they broke the POS system by literally trying to but more items than the system could handle.

Apparently, Kohl’s POS can only handle 200 items in a single transaction!

Generally speaking, Alysha said the store managers are happy they’re taking all the stock they can’t clear themselves off of their hands.

They’ve even gotten to know a few store managers over the years. Some will message them and tip them off from time-to-time when they have shipments of clothing in-store that they think will appeal to Nate and Alysha.

Why Aren’t Kohl’s Selling This Stuff Online Themselves?

When reselling or flipping items, it does make you wonder why Kohl’s, and other large stores like Walmart, could list these items online themselves if there’s profit in them. They could even sell them on Amazon themselves.

Nate doesn’t see this happening anytime in the near future though. He said for Kohl’s, they’d need to employ someone in each store to manage their online flipping in a similar way to how he does it.

That’s probably isn’t feasible for them.

There’s risk involved too. Nate ends up with stock that doesn’t sell sometimes, which ends up getting liquidated at a loss or donated.

It’s easier for stores to manage their own margins in-store and online. Going through their stock and looking for items that might be better placed online is more costly for them.

Hiring Help and Training Others

Nate and Alysha have hired helpers before to increase the amount of stock they’re buying. They also train others to become Amazon sellers.

For their own helpers — which were mostly friends and family — they would pay them an hourly rate for prepping and shadowing Nate to learn the ropes.

They then paid them a percentage commission based on how much profit the items they sourced sold for.

This added a little extra motivation for them to find the best possible deals as it meant they were earning more.

There is an obvious worry about training someone to buy for you, they might start their own Amazon business. But this isn’t a big deal to Nate and Alysha.

Some of their helpers did go on to start their own businesses, and they’re both totally fine with that happening.

“There’s so much to go around, it’s not hurting our business at all,” Alysha said.

How Easy Is It to Get Started?

It’s not difficult to get started as an Amazon seller. But it does take some time to become good at spotting a great deal and where you can pick up inventory in bulk.

Alysha said for the first few months she and Nate would often come away empty-handed. It took them time to learn where the best stores to find profitable items were, as well as how to spot them.

If you’re getting started today, Nate’s advice was, “focus on the clearance sections first.” Alysha added, “for the first 6 months, we really tell people it’s just for learning.”

“It’s not fast or easy money,” they both said. But it is a simple process.

How Much Time Is Required?

When Nate and Alysha got started, they were still working full-time and didn’t have any kids.

They would be out checking for items every weekend, on their days off, after school, before school, and even during lunch breaks.

Just about any spare time they had, they’d be sourcing.

For the first year, they dedicated as much time as they could. They didn’t pay themselves anything either — they reinvested all the money they made back into the business.

As a result, they were able to quit their jobs and become full-time Amazon sellers after just a year and a half.

Their business was doing so well that it was literally costing Nate money to go to work. At that point, he knew it made sense to leave his day job.

What Margins Are You Aiming For?

When sourcing, Nate said it’s difficult to calculate all the fees exactly. As a general rule, he said you should work to a 100% ROI (double your money on cost-of-goods-sold) and keep in mind the “30% rule”, which is:

The Amazon seller app tells you how much their fees are, so you’ll have a good idea of how much you need an item to sell to cover the cost plus fees.

Can You Source Inventory Online?

Nate and Alysha also source a lot of their inventory online. They use a tool called TacticalArbitrage, which helps them find profitable products quickly to flip on Amazon.

As you’d expect, margins are typically lower online and there is more competition.

There have been a few buys along the way that haven’t sold as well as anticipated.

One example Alysha shared — and the reason she recommends her students never go all-in on one product — is some oil diffusers they bought.

They bought a trial batch of diffusers for $35 each, and they sold quickly for $70 each. So, they spent their whole budget buying more of the same diffusers.

The very next day, the manufacturer began selling them on Amazon for $35 — erasing all profit potential.

“Go wide, not deep. Buy one of a hundred different things,” Nate said. “If 20 of them end up being bad buys, the other 80 will end up being good buys.”

Now they’re experienced sellers, only 5%-10% of their buys turn out to be bad buys that end up being liquidated.

What Other Tech and Tools Are You Using?

Nate and Alysha also use Scoutify 2 (iOS App and Android App), a product scanning app from the team behind InventoryLab.

Nate likes how the data is presented with this app. It also integrates with his InventoryLab software and Keepa, which is a tool to track sales history on Amazon.

The feature he likes most about this app is that it’s easy to look at his own historical data. He can scan an item and check if he’s ever bought it before, has any in stock right now, how much he’s sold it for, and so on.

This feature came in really handy when he was using hired helpers. It ensured they didn’t buy too many of the same items, as well as helping them know which items are selling well.

If you’re just starting out, Nate said you don’t need these tools. All you need is the Amazon Professional seller account until you start turning over some profit.

Things like a UPC scanner and a Scotty Peeler are inexpensive and will save a lot of time on the packaging and shipping side if you have some budget to start with.

Could Your Retail Arbitrage Inventory Dry Up?

Nate said he’ll drive an hour or so away to find new stores and scan items. And said there’s always somewhere he can find profitable items.

He admits he’s fortunate that he lives in Orlando, which is known as a good shopping destination.

Bottom line, running out of stock doesn’t worry him. He said there are always new stores to hit, and you can always start looking at a different niche of items if you’re running thin on clothes.

Nate and Alysha have dialed in their processes and the business has become pretty passive.

Nate spends about 3 days a week shopping, which works out at about 15 hours of his time. He then hands everything over to his team to pack and ship off to Amazon.

They’re thinking about trying out selling some private label goods this year. That’s a more passive income model, has potentially higher returns, and doesn’t require the legwork shopping for items.

If you want to learn more about how Nate and Alysha go about running their business and connect with other sellers, they recommend starting by joining their Facebook Group.

Nate and Alysha’s #1 Tip for Side Hustle Nation