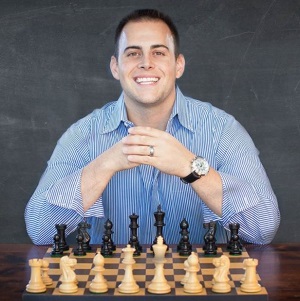 That’s the story of today’s guest, Jeff DiOrio from EliteChess.net.

Jeff went from earning $17/hr working in summer camp chess programs teaching kids how to play chess, to running his own camps and earning five times as much.

He then transitioned to an online recurring membership model, in part due to the pandemic, while also keeping the in-person coaching side of his business alive.

Jeff’s approach to growing his student numbers so rapidly?

Organic growth through giving to charities and delivering a value-driven service, all while doing something he loves—teaching chess.

The Idea to Start Elite Chess

Jeff was teaching kids how to play chess at a neighboring school’s summer camp when he first had the idea to start teaching chess for himself.

“I was making $17 an hour and starting thinking, ‘Wow, maybe I could do this for myself and give myself a little bit of a raise,’” Jeff told me.

Validating the Idea and Getting Started

Jeff admitted that he’s often a little slow to act on ideas sometimes and didn’t put the wheels into motion on his side hustle right away.

It was just before Jeff started his fourth year of summer camp that he decided to host a chess tournament himself to see what the response would be like.

Jeff didn’t want to do it all under his name, just in case “it didn’t go well, or my idea wasn’t as strong as I thought,” he explained.

So, Jeff decided to reach out to some local charities to host the tournament under their name.

He found a charity that wanted to partner with him. They helped by promoting the tournament to their audience, and Jeff gave them all the proceeds.

Jeff said the tournament was a success. It validated his idea that there was a demand for chess tournaments and a number of players in his area.

Building a Following and Hosting a Summer Camp

After the initial chess tournament, Jeff started getting more involved in the chess scene in his area.

Jeff started putting on chess tournaments in local schools. These went down well and attracted new students and their parents.

He would also turn up at other chess tournaments and offer to coach kids for free. Jeff would run through their games with them after they lost and show them what they could have done differently.

Jeff said little crowds of people started to form around him at these tournaments. People would ask if he offered 1-on-1 coaching and where they can find out more about him.

He started collecting emails and would tell people that he was going to start running his own chess summer camps.

After a few months, Jeff said he had around 50 emails. Jeff took the plunge and rented space in local schools and churches throughout the summer and put on his first summer camp.

Jeff said he had 12 kids show up the first week. “I remember making five times the amount of money that I made teaching summer camps for somebody else with just 12 kids,” Jeff told me.

After summer ended and the summer camp came to an end, Jeff said he had parents and kids asking if he could carry on teaching them chess.

This is when Jeff officially started EliteChess.net. He started putting on weekly chess academies and running his classes in 7-week blocks.

At the end of each 7-week block of classes, Jeff would go out and find more students to enroll in the next one.

As his student numbers kept growing, it got to the point where Jeff was being asked to host seminars and tournaments.

Giving to charities was always important to Jeff and something he’s continued to date. He said it was just through working with charities and word of mouth that his student numbers kept growing.

There were organizations already doing tournaments similar to what Jeff was doing, but he didn’t know of anyone offering similar classes.

After-school chess programs are popular, but these aren’t as chess-focused as what Jeff was offering.

With no real competition to base his pricing on, Jeff said he found it challenging to come up with starting prices.

Jeff decided to charge $8/hr for his first group lessons — because that’s what babysitting cost!

This worked out pretty well as it was for group lessons. Jeff has 12 kids in his first group, so that was a total of $96 for the hour.

Jeff’s pricing has come a long way since those first classes. Today he charges $25/hr for in-person classes, and online classes are $17/hr.

Every time Jeff raised his prices over the years, he always tried to give something more back.

This is what pushed him to host more tournaments and seminars, offer individual assessments, and other services.

Jeff said the more he gave in terms of services and offers, the more it justified raising his prices.

Jeff told me he’s not sure where his pricing will go in the future, telling me, “We’ve never raised prices and lost people.”

Jeff switched to a recurring model as a way of earning more reliable revenue and also keeping people as paying customers for longer.

When he switched to a monthly membership model, Jeff said he started thinking about ways to reduce churn.

He approaches this in several ways.

Jeff said he keeps a strict schedule in terms of when he holds his classes. This helps his students build habits around being there at the same time every week.

Jeff said he’s always looking for ways to offer more value and this is one of the best ways to keep people from leaving.

“Finding ways to show progress to kids is really powerful,” Jeff told me.

Jeff uses progress charts to show his students where they started in the curriculum and where they are now.

He uses stickers, keychains, and other rewards as ways of demonstrating to kids how they’re progressing.

These tactics have helped Jeff to keep the churn rate for his in-person students to less than 3%.

His online churn rate is a little higher at 9-10%. Jeff said this is because he can’t use the same progress system, but he’s currently working on figuring out a way to tackle this.

Transitioning Online Due to the Pandemic

Like a lot of businesses that rely on in-person interactions, Jeff said he first transitioned online due to the pandemic.

“That was a huge wake-up call for me,” Jeff told me.

Jeff explained that the pandemic made him realize the importance of insulating some of his business from external forces.

He switched over to online coaching and chess classes and cut all of his prices in half. Jeff said he emailed his students and asked them to stick with him, and they did.

Jeff said he actually saw an increase in numbers due to switching to online lessons. He went from having 90 kids turning up to classes in person, to more than 200 online students during the pandemic.

This was due to some of the people who couldn’t make it in person before now being able to join online. Plus, he was also able to reach a much wider audience.

The tools and tech Jeff is using to stay organized and run his business are:

Jeff has also hired additional coaches as his members have risen. Transitioning to an online model also made it easier to bring in coaches from all over the world.

Jeff said he currently has chess coaches from India, Bosnia, and across the US.

He also explained that it’s important for students to build strong relationships with coaches, so he assigns a coach to a student and they stick with them.

“It’s incredibly daunting,” Jeff told me when I asked him about how he keeps his curriculum up to date.

Jeff used to create and update the curriculum himself, but it became too much to manage with all the other tasks he was managing.

He now buys a packaged curriculum that has all content already prepared. Jeff currently has 5 levels for students to work through, with 30 topics in each level they can progress through.

When a new student signs up, Jeff said he plays a game of chess with them. This enables him to see what level they’re at so he can start them at the appropriate level in the curriculum.

It’s only within the last few months Jeff has started actively marketing Elite Chess. He’s been trying out some Facebook ads spending less than $10 a day.

It’s always been word of mouth and doing charity events that have brought new members into his ecosystem, and that’s still the case.

Jeff always donates to schools and community projects that approach him asking for help getting a chess project started.

(He said he’s donated thousands of chess boards so far!) As a result, when someone asks one of Jeff’s recipients where they can learn more about chess, they’ll send them to Jeff.

Jeff said he never saw his side hustle becoming a full-time business, but he’s reaching the point where that is a reality.

He’s now making more money from EliteChess.net than he is from his day job, so he may go full-time in the near future.

Jeff’s also opened a physical location in his community last month for his in-person classes, and he’s planning on expanding his online coaching into YouTube.

Jeff’s #1 Tip for Side Hustle Nation