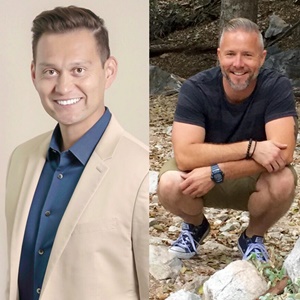 And I’m inclined to believe him. You can make $100 an hour as a part-time, and the only real requirements are that you know what you’re doing, and you have a notary license.

(A loan signing agent is the person who walks you through the giant stack of forms and contracts you have to sign when you close on a new home loan.)

I was first introduced to this side hustle early last year, when I first sat down with Mark Wills and his business partner Roman Rosario.

That conversation turned into episode 215 of the Side Hustle Show, where the pair walked me through how they built and sold an online course starting with no audience.

At that time, the Loan Signing System course, which he teaches people how to become loan signing agents, was doing around $4k a month.

But what we didn’t really cover in that episode was how to become a loan signing agent and what that business is actually like — to the frustration of many listeners. So in response to audience feedback and several listener testimonials, I invited Mark back on the show, along with one of his successful students, Brian Schooley, to dive into the loan signing side hustle.

How to Get Started as a Loan Signing Agent

Brian Schooley is a father of 5 who works full-time in tire sales, yet he’s bringing in $1500-2000 a month part-time as a loan signing agent.

In need of some extra cash, Brian started working a weekend job, but the long hours and low pay were taking a toll.

Around that time he started listening to The Side Hustle Show and discovered the loan signing side hustle. “It was just something that made sense,” Brian said. “I went on Mark’s website, bought the course [affiliate link; use promo code sidehustle for 10% off], and just went at it, and it’s been awesome.”

What are the Requirements to Become a Loan Signing Agent?

The most important requirements to become a loan signing agent are:

If you have a background in real estate, you may already be familiar with the documents and contracts. If not, it might make sense to take a course like Loan Signing System.

Mark acknowledged like any other skills, you can totally learn what you need to know on your own; he just offers a fast-track training.

For his notary license, Brian paid a $69 application fee to the state (California) and took a $40 online course to help him pass the short certification test.

(The vast majority of states don’t require a test.)

Loan signing agents are also required to carry Errors and Omissions insurance, a policy Brian said set him back around $100 for the year.

The low upfront investment was one of the factors that made this side hustle appealing to Brian, and he made back his investment very quickly.

How to Get Loan Signing Gigs

Loan officers and real estate agents need signing agents to sign off on home loans. Brain said there are two main ways they find their agents:

Brian’s first signing was through the signing service. He received a text to sign off on a loan application and made his first $50 for an hour work.

In those cases, the signing service handles the payment, so you receive the money by direct deposit.

What’s the Loan Signing Agent Side Hustle Really Like?

Brain said he got off to a slow start while he was getting his name out there, but hit his goal of $2000 in monthly income only a year after starting.

He still works his full-time job from 7am-4:30pm, so he does all his signings in the evenings and on the weekends. Each gig pays $50-150 and rarely lasts more than an hour.

Brian does have to turn down some signings while he’s working. He offers to do them later in the evening and sometimes the client will accommodate that. (Since most homebuyers are working, most signings are evenings and weekends anyway.)

You do need a reliable car to drive to your appointments, and while most signings are pretty straightforward, you never know who you’re going to meet. Brian described an interesting encounter with a buyer “way out in the desert,” but added it’s just par for the course in any side hustle that deals with the public.

Mark added that a majority of signing agents are women and that buyers have gone through a pretty thorough loan application vetting process.

In fact, it’s been such a fun and lucrative experience, Brian’s wife is getting started as a loan signing agent too!

The easiest way to start getting signings is to add your name to as many signing services as possible. Mark described these directories like “Uber for signing agents” — they connect you with buyers pretty seamlessly.

Brian has also grown his business by developing relationships with “suppliers” in the industry. Those are the loan officers, real estate agents, title agents, escrow officers, and others involved with the closing of home sales.

“Every single one of us knows a real estate agent,” Mark said. Use those contacts to get your name out there.

With this being such a lucrative side hustle and easy to get started with you’re right to wonder what the potential downsides are to being a signing agent.

Is the Market Saturated?

A question that Mark gets asked a lot is about market saturation. There is a fixed amount of loan signings per month, so adding more agents will only reduce the potential income.

Mark says this isn’t really an issue because the industry caters to when customers can meet. Since everyone’s schedule varies, there’s room for more agents to fill those timeslots.

Another potential downside is that it’s an on-call business.

Brian might get a text at 4pm asking if he can make a 6pm signing. It can be tough to make plans in advance or have the discipline to turn down $150 for dinner with the family or whatever other evening obligations you have.

Could it Be a Full-Time Business?

I asked Brian if he thought he could take the signing business full-time, and he said yes.

At one point he was tracking all the appointments he couldn’t make because of his day job, and was surprised by the volume of work that’s out there.

Although he had made $1500 the month we recorded this interview, his business has continued to grow. He occasionally sends me updates on his progress like this one at $3500:

Next Steps to Become a Loan Signing Agent

What Have You Been Up to Since We Last Spoke?

“I’ve actually taken the business from a part-time thing to my full-time gig,” Brian told me.

Brian continued to put more time into his signing agent business, and there came a point where he was earning more than though his full-time job.

The point where Brain said he really knew it was time to go full-time, was when his loan signing income had doubled his 9-5 income.

Brian said the decision to quit their day job might come easy to some, but for him, it was “scary”. With 3 kids and a house to pay for, he wanted to be sure he was making the right decision.

Looking back, it was one of the best decisions he ever made. Brian is loving life as a full-time notary signing agent.

How Much Are You Making Today?

Did Anything Change on the Marketing Front to Get More Signings?

“For me personally, it was this slow burn of creating relationships with people,” Brian told me.

Most of his business comes from word-of-mouth and referrals. For example, when Brian meets an escrow officer, he’d ask if they have any friends in the industry.

If they do, he’d ask if he can go chat with them and mention they sent him. By doing this, Brain has built his business on direct business.

As a result, he hasn’t relied on a signing service in more than a year. Which means he’s making around twice as much as he doesn’t pay fees for his leads.

How Has the Pandemic Affected Your Business?

A lot of notaries chose not to take signings during the pandemic. Brain, on the other hand, decided to go for it and carry on while staying as safe as he could.

As the pool of notaries shrunk, the number of signings also went up as interest rates went down. So, Brian had as much work as he could handle, and he jumped on the opportunity.

It was a little more difficult than before. No more meetings at Starbucks and signing documents over coffee. Brian now accommodates the customer however they feel comfortable.

This has meant singing documents on the back of his truck and on tables in their front yards, but as Brain said, “it’s not worth complaining over”.

Brian has heard the buzz around doing more signings online, and it looks like this is the direction the business is going. He’s done some hybrid signings, which means some documents were signed online by the customers before he arrives.

As of now, California is still a “wet signature” state. Which means certain documents have to be signed in person. Brian hopes it stays this way for the foreseeable future as it makes his job a lot more secure.

What Else are You Working on Right Now?

Brian has a podcast called “That Loan Signing Dude”, which he does for fun and to help encourage others getting started.

The next big step for him is to create a signing service. Currently, Brian has to occasionally say no to signings if he’s at a family event or unable to make it for some reason.

He wants to set up a service so he can pass those signings on to someone else to pick up. This way he never has to say no to an escrow agent, and he can also make a commission on the signing.