Skip to content
Home » How to Start a Hot Tub Rental Business: Zero to $1000s per Month 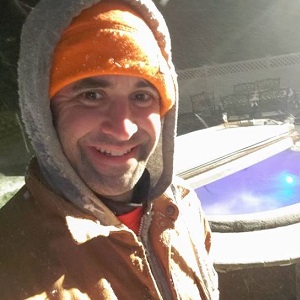 How to Start a Hot Tub Rental Business: Zero to $1000s per Month

Steve is a high school history and economics teacher in New York, and a listener of the show.

He reached out after our Thanksgiving episode, which touched on renting out attic space and even camper vans and semi-trucks as potential sources of recurring revenue.

Steve started a hot tub rental business to replace his summer job income, with the goal of earning $1000 a month. Today, he’s got 25+ tubs in his “fleet,” delivers them with his pickup truck, and is doing thousands of dollars in bookings every month.

Steve explained renting hot tubs is quite common in Europe, but doesn’t have much competition in the US yet.

Steve’s day job is as a high school teacher, he teaches history and economics. He also had a summer job for many years working in parks and recreation. Steve started out as a lifeguard, then became a manager, and eventually was running the entire operation during his summers.

“It was like a dream come true,” Steve told me.

However, the day came when he had a new boss that he didn’t see eye-to-eye with, so Steve started looking for another summer/part-time job.

This is when he started bouncing around the idea of a rental business. He knew people rented a lot of outdoors stuff in New York, like tents, chairs, inflatables, and so on.

After looking into these things, Steve found out “it was really a saturated business.”

Then Steve came across someone renting out hot tubs in Syracuse, New York. This appealed to him a lot more, so he reached out to the guy. Steve ended up going up and meeting him, learning the ropes of the business, and buying three hot tubs from him.

Steve admitted he didn’t do a lot of competitive analysis.

He could see that guy was making it work in Upstate New York and knew there wasn’t anyone doing this where he lived in Long Island.

There are more than 1 million people living in Long Island, and some pretty affluent areas. So, he had a good idea that there would be demand.

At the point of buying those first hot tubs, Steve’s goal in mind was to replace his summer job income. He was making $10k a year with his summer job, so Steve set himself the goal of making $1k a month throughout the year renting out his hot tubs.

Of the three hot tubs Steve bought from the guy in upstate New York, he said two were in great shape and the other was going to be used as a spare, as it wasn’t in the best condition.

He already had a pickup truck and a trailer, so there was no additional investment there. If you don’t have a trailer, that’s something you’ll have to factor in. Hot tubs are pretty portable, they roll and parts can be removed, but they do weigh around 200 lbs.

Steve had never built a website before, but he gave it a shot using Squarespace. He got the site as far as he could, then hired the help of a freelancer for 3-4 hours. He also paid for some signage for the truck and some other bits, but that’s about it he told me.

Customers visiting his site can reserve a hot tub via calling him, leaving a Google Voice note, emailing, or reaching out through Facebook and Instagram.

These are the main channels that Steve uses to drive sales.

Facebook has been a huge driving-force for orders and customer inquiries. “I cannot imagine growing this business in the way we have without Facebook,” Steve told me.

Steve would take pictures after setting up a hot tub and post them on the LIHotTubRentals Facebook page. He said he started to see traction on Facebook early on because hot tubs are very visual.

Steve said a large chunk of his customers has come as a word-of-mouth referral. Which, taking into account the nature of his business is very important – and not surprising.

Steve told me he’s done about 700 rentals at this point, and on any given month about half of those are from returning customers.

By virtue of there not being any real competitors, Steve is also getting new customers organically each month. His site is ranking for keywords like ‘Long Island hot tub rentals’ which is bringing in organic visitors to the LIHotTubRentals site.

“I’d like to say that I really studied the market and looked at all kinds of data. Really, I looked at what I needed to make to get rid of this summer job,” Steve told me.

With two tubs, Steve said his basic math was to price them at $199/week and have them rented out at 50% capacity across the year. That would net him close to the $1k/month he was aiming for and replace his $10k summer job income.

He came up with the $199 as this felt like what he’d pay. He also knew alternative things like a short vacation or a birthday party were also around this price point.

Yes, there’s labor involved, but compared to a traditional rental property, that might cost $200,000 and bring in $18,000 in annual rent (9% ROI), it looks pretty attractive.

How Are You Taking Bookings During the Day?

Steve works full-time as a high school teacher, so he can’t be available to take calls all day. Most calls go straight to Google Voice and people are asked to leave a message. His wife picks most of these up, and either forwards them to Steve or answers them.

Steve said he’s able to check his mail and respond to those queries throughout the day. He said with this system they’re able to respond to every customer within the same day, most within just a few hours.

When he calls a customer back and confirms an available date for a hot tub, Steve then asks for a $50 deposit and takes payment through Square. The balance is then paid on delivery.

Setting up the hot tub is all part of the service. All Steve needs is a power supply and water source, and he’ll set up the tub and leave written instructions on how to operate the tub.

He usually starts filling the tub so the customer can see it working and adds the chemicals. He will then leave them to fill up the entire tub as it typically takes 40 minutes or so.

Storage in Between Rentals

Steve has close to 30 tubs, if he had to store all of those at the same time it would understandably cause a problem in terms of space.

The good thing about renting out his inventory — and being in such demand — is that he rarely has many at his property.

In fact, at the time we spoke, Steve didn’t have any hot tubs at his home, which is where he stores them in between hires.

Any business that involves renting out items to customers can expect to accumulate a few nightmare stories over time.

Steve said it’s not been that bad to date though. He’s bought a couple of tubs that he thought he could fix, but ended up realizing he couldn’t. He’s also had a few accessories fall off the truck during transit.

Outside of those kinds of problems, occasionally Steve gets an order from someone in an apartment block in New York. It’s a bit of a task to get the hot tub through an apartment building and out to a small outdoor space, so those are a bit of a headache for him.

Unless it’s a long-term rental, Steve will charge a delivery fee for the extra time it takes to get the hot tub installed.

The Benefits of Using One Brand of Hot Tub

Steve only uses one brand of hot tub (SofTub). He does so because it’s the best option for what he needs; size, weight, durability, portability, and so on.

But it’s also because it makes maintaining his hot tubs a lot easier and less expensive. He’s got to know the brand well, so he can do most of the repairs himself. This also means parts are interchangeable, so he can easily swap parts from one tub to another.

Who’s Working in the Business?

Right now it’s just Steve and his wife handling everything. Steve doesn’t have any plans to leave his day job. This is the main reason why he offers a discount for longer-term rentals, it means fewer pick ups and drop off for him.

Steve does all the deliveries and pickups himself. His wife handles all the scheduling and makes sure he’s driving efficient routes etc.

They’ve looked at various software and booking systems, but haven’t been able to find one that suits their needs. As of now, Steve’s wife is handling bookings by assigning tubs to a calendar per its number and keeping track that way.

Cleaning Them In Between Rentals

When Steve picks up a tub, he pumps out around 75% of the water, leaving about a foot of water in the tub.

He then ‘super-chlorinates’ that water and runs the tubs. The super-chlorinated solution then runs through all of the internals of the hot tub and over the surfaces people touch and gives it all a good clean.

He then pumps that water out and takes the tub home. Once he has the tub at his home, he fills it with fresh water and runs it again. He then does a final run with soapy water, swirls the tub out, and it’s good to go out to the next customer.

“Water and electricity is definitely a cocktail that you want to keep separate,” Steve said.

His business is formed as an LLC, and he has adequate insurance for property damage and personal injury.

With no plans to leave his day job, when Steve hits the 30 tub mark he’s planning on hiring some part-time help. Otherwise, it’s just not going to be possible to manage that many tubs in his spare time.

Steve is also toying around with some other ideas to grow the business. He gets calls from all over the state, far outside of where he can currently deliver. So he’s thinking about creating subsidiaries in other locations or even creating a franchise model.

Steve’s #1 Tip for Side Hustle Nation

“Talk to every single customer.”