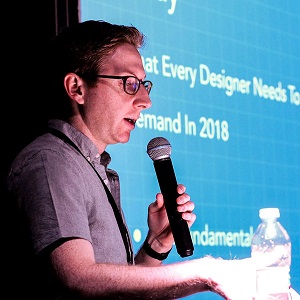 Upload it to a store.

Earn passive royalties whenever it sells.

That’s the passive income dream, and that’s the premise behind the Merch by Amazon and print-on-demand side hustles.

But does it really still work?

To find out, I invited Michael Essek on to the Side Hustle Show.

Michael has been designing and selling t-shirts online since 2013, and he’s seen how the market has changed over the years.

For the past 4-5 years, Michael’s earned $100,000+ licensing and selling his designs, so he has his finger on the pulse of what’s working right now.

Big thanks to Stacy Caprio for the intro! (Make sure to check out Stacy’s financial independence fast track.)

The Current State of Merch Platforms

All of the large merch platforms have been around for a while, and it’s a business model with low barriers to entry.

Not surprisingly, “It’s become a much busier place,” Michael told me.

Michael said that since he’s been in the business, he’s seen more people learn about print-on-demand services, the technology has improved, and more platforms have appeared for people to sell on.

This doesn’t mean it’s not a great time to get started though. Michael emphasized there are still plenty of opportunities here.

“For people who really invest in it, hunker down at it, and are willing to put in the effort for a year, maybe two years before it really starts to rocket, I think there are good long term prospects for anyone entering the space right now,” Michael told me.

He said that if you have something unique and original to bring to the market, you’ll be able to sell your designs.

Which Platforms Are You Using?

Michael sells his designs across various platforms. The four biggest in terms of revenue are:

He also mentioned Threadless and Society6 as two platforms that are growing nicely for him right now.

Michael has also tried selling his designs through his own Shopify store. In fact, he had some success a couple of years ago and was building an Instagram following to help promote his designs.

However, he said that he’s found his “sweet spot” to be “somewhere between online licensing and creating designs, and actually licensing them offline as well.”

Where Should Someone Start Selling?

Michael always tells people to start out selling on one of the fulfillment or print-on-demand platforms (vs. on your own site).

He said it’s important to first prove that you’re able to create stuff that people want to buy. Almost like using these platforms to validate your idea.

Once you’ve done that, you can try and sell your merch through your own Shopify store. But taking on the additional marketing and finding an audience online when you’re first starting out is a huge task.

What’s a Typical Profit Margin on These Platforms?

“You’re usually looking at around the sub $5 mark,” Michael told me.

On the two largest platforms he sells on — Merch by Amazon and Redbubble — Michael said he averages $4-$5 per sale.

That said, Michael said he keeps his pricing fairly high. He said people are willing to pay a few dollars more for a shirt that is exactly what they’re looking for.

The third-largest platform he uses, Teepublic, operates on a different model. They have a fixed price per t-shirt and don’t allow sellers to change the price.

How to Make Merch Into a Reliable Business

“It’s a volume play,” Michael told me. To make a reliable income from merch you’re going to have to build up a portfolio over time and sell across multiple platforms.

It’s hard to make a reliable income if you keep targeting short-term trends. Michael recommends focusing on evergreen designs for the most part.

He now has around 5000-7000 unique designs online. On Amazon, that translates into 25,000-30,000 separate listings as you can use the same design across multiple products.

There are a lot of benefits to having a large portfolio of designs. Sometimes, Michael will see an older design take off, some become long-term bestsellers, and sometimes, you can re-purpose those older designs.

This is exactly what a friend of Michael’s did when mask sales skyrocketed due to the pandemic.

His friend had some t-shirt designs that he thought would work well on masks. He applied the designs to masks — which is easily done in just a few clicks on print-on-demand platforms — and ended up with two of the best-selling mask designs on Redbubble.

Which Platforms Should You Syndicate Across?

In the early days, Michael said he would just upload all his designs across as many platforms as possible.

As he’s learned more about the types of audiences each platform has and what sells best, he’s become more strategic in his approach.

For example, here’s how he approaches three of his main platforms differently;

How Many People Are Helping You?

Michael has always been very hands-on with his business, but today has his sister, her husband, and his mom helping out.

He also has a couple of graphic designers he will task certain designs with that they’re better suited to handle.

Beyond that, a third party agent has helped him secure offline licensing deals.

But for the most part, Michael is and always has handed most of the processes within his merch business.

Are Copycats a Problem?

One of the main issues with huge marketplaces like Amazon where anyone can sell is that there is a trend to look at what’s selling and copy that idea.

Michael admits this is a huge problem in the print-on-demand space. It shouldn’t be something that puts you off though, and there are ways to separate yourself from the crowd.

If you do spot a blatant copy, you can submit a DMCA notice. This essentially means you can prove you made the original version and someone else had copied you. The platform will then take down the copycat version.

But for the most part, Michael said if you focus on coming up with your own new and creative ideas, you’ll do fine.

How to Come up With Merch Product Ideas

First of all, Michael reemphasized that merch is a volume play. Even with thousands of designs on the market, he said maybe only 20-30% of those have ever sold.

So, Michael goes into the design process knowing only 2-3 of every 10 new designs are going to sell.

When he does get a design that sells, Michael said he tries to identify what it is that made that design sell.

If you can identify what’s driving the sales of a shirt, you should focus on trying to replicate that in future designs.

As for his creative thought process, “a lot of my best sellers are random ideas” Michael told me.

As he gets ideas throughout the day, Michael notes them down in Evernote. Once a week, he goes through his list and trims it down to the ideas that he thinks will work.

Three Questions to Ask Yourself Before Designing

During the research phase, Michael asks himself the following three questions to help validate an idea he’s had, or come up with a new one:

This is why he recommends new sellers get started creating designs around a niche or a topic they know well.

When he was starting out, Michael would drop his design in Subreddits he was interested in and ask for feedback. Which is something you can’t do unless you’re invested in the niche you’re creating designs for.

Michael also said this gives you valuable insight into in-jokes, memes, and other pop-culture references that only other people in the same niche will understand.

How Important Are Customer Reviews?

On Redbubble, reviews aren’t important as they don’t have an individual review system. On Amazon and Etsy, however, reviews are very helpful in making sales and even as part of their ranking algorithms.

Still, Michael doesn’t reach out to people and ask for a review; he lets reviews happen organically.

(Etsy does allow you to message customers, but he has only been using this to notify people of delays due to the coronavirus lockdown.)

What’s a Typical Day Look Like Running a Merch Business?

In addition to his merch business, Michael now spends a lot of time producing content for his blog and YouTube channel teaching others to start and grow their merch businesses.

This is a far cry from how he was spending his days a few years ago. Michael remembers spending days on end uploading hundreds of designs to Amazon.

He’s happy to have some more creative freedom these days!

How to Branch Out Into Offline Licensing Deals

With a few thousand designs online, and some selling very well, Michael started learning about the licensing industry to see if he could find a way to take his designs offline.

He started by renting a booth at a licensing trade show in London. He set up a stall, displayed some of his designs, and made 5-10 connections in the licensing industry.

One of those connections ended up becoming his licensing agent. He’s helped Michael license his work in the states, and has gotten some of his designs into brick and mortar stores like Hot Topic here.

Threadless, one of the print-on-demand platforms Michael mentioned earlier, actually has a licensing arm to their business. While his designs haven’t sold that well on the platform, they’ve helped Michael secure licensing deals.

How Much Do You Make From Offline Licensing Deals?

Michael said the commission structure is comparable with online sales. Each deal is worked out on an individual basis, but it usually works out that around 5-10% of the retail sale price goes to the artist.

If you already have a portfolio of designs and want to explore licensing opportunities, Michael recommended attending a licensing trade show.

Can “Non-Designers” Start a Merch Business?

If you like the sound of starting a merch business but think it’s not an option because you don’t have any design skills, Michael said this shouldn’t stop you.

He personally knows a lot of people making good money selling merch without any design skills of their own.

Michael said you have two options:

Related: From “No Skills” to $3k a Month on the Side

Michael always recommends that you don’t look at Amazon or any of the other platforms as your “end result.”

Always keep in mind that you’re using someone else’s platform. Your account or business could disappear at any point, and he’s seen it happen.

Michael said you should use these platforms as a tool to build something more long-term. For him, he’s used them to build an art and design-lead brand, allowing him to license his designs both online and offline.

You could also use these platforms to build a brand and a following, then take your audience to your own Shopify store.

Michael’s #1 Tip for Side Hustle Nation