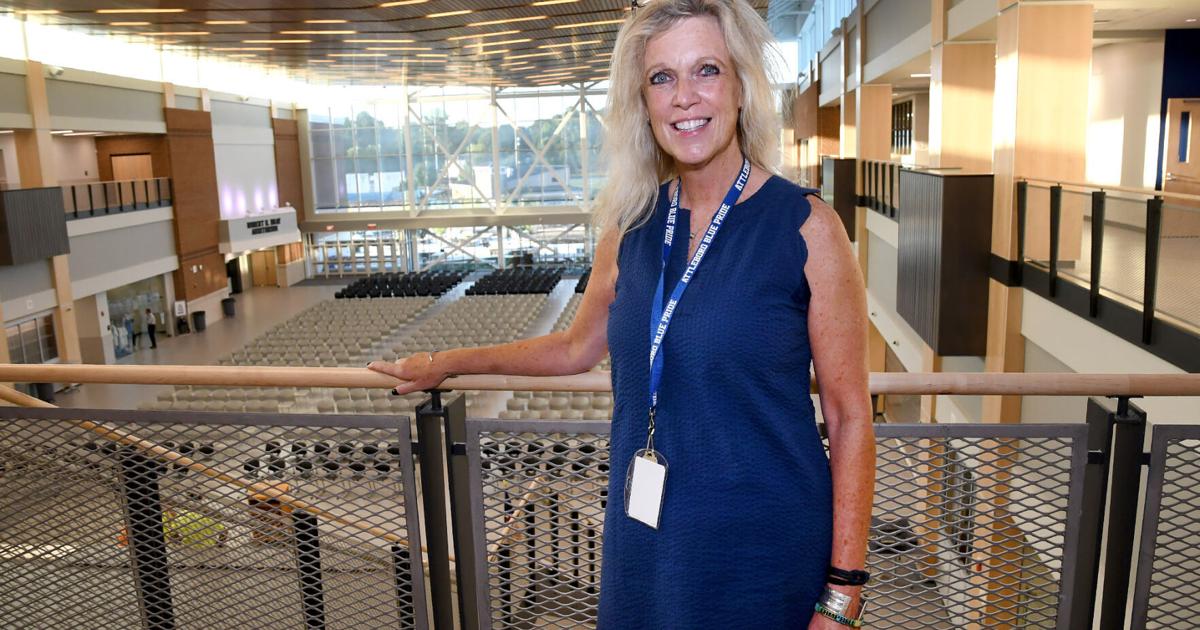 After years of planning and three years of construction, Attleboro’s new $259.9 million high school will throw open its doors to students who will get an education they could not get in the former 1962 model which is next door being razed.

The past is over, the future is here.

Students will flow in from the back where the bus loop is and from the front where the drop off is.

They will all meet in an enormous hall which runs from the front of the school to the back.

In that space, there’s the principal’s office with the security office in the front.

There’s a giant stair case in the middle where students can sit and kibitz.

In the back is the cafeteria, gym and theater.

Those areas are centralized for easy access when the public comes in for a game in the gym or a play in the theater.

Not only is the school new, so’s the principal — her name is Kate Campbell.

She’s new to the school, but not to Attleboro.

Campbell spent the first 20 years of her career in the city before leaving for 10 years.

In a previous interview, Campbell said she feels like she is “coming home.”

She started her career as a special education teacher at Hill-Roberts School and also worked at Coelho Middle School and Willett Elementary, where she was principal for eight years.

Some of the roles Campbell took on in Attleboro included classroom teacher, special educator, head teacher and literacy coach, as well as principal.

“I often tell people, everything I know about teaching and education I learned in Attleboro,” she said in a previous story about her selection as the head of Attleboro High School.

As for the new job, she couldn’t be happier.

“I am thrilled to be the next principal of Attleboro High School,” Campbell said. “I will be returning exactly 30 years from when I began my teaching career.”

After spending 20 years in the district, she took the job of principal at Jackson Elementary School in Plainville.

The last two years she’s worked as a principal at Igo Elementary in Foxboro.

And now she’s back where she started — home again.

Campbell will be at the door early, around 7:15 a.m., to welcome the high-schoolers who are in for a school experience they could not get in the old building.

“It’s going to be great,” Campbell said of opening day. “But we’ll have some bumps, there’s no doubt about it.”

Former principal Bill Runey, who was involved in much of the planning for the new school, won’t be there to celebrate.

He’s moved up the educational ladder to a superintendent’s job in the Dighton-Rehoboth Regional School District.

But Campbell, who started work on July 1, is very familiar with the new school, its programs and the exciting opportunities it will offer.

Campbell not only had to familiarize herself with her new responsibilities as a principal of a high school, but to oversee the organization of the new building as well.

And that has made her very busy.

Work to be doneOn Thursday, there were still a number of jobs that need completion.

For example, hundreds of large orange plastic crates which once held supplies lined the hallway behind the Market Place where residents can buy a meal at the Bistro, get their hair done, buy business cards from the graphic arts department or bank at the Bristol County Savings Bank.

“Hopefully these will be gone tomorrow,” Campbell said of the crates as she quickly walked past them on the way to the Bistro where students will learn the food service business in a beautiful new kitchen and service area.

The dining tables have not come in yet, so the school is making due with some well-used others until they arrive.

Campbell’s phone was constantly ringing during the interview. Staffers had questions and she was the one with the answers.

Time was growing short and the school had to be ready for Monday.

One of her concerns was the bus loop which needed more work, she said.

And she was dealing with furniture arrivals and making sure there were enough parking spaces for students and staff.

Meanwhile, workers were putting the finishing touches on the giant staircase and others were bustling around taking care of odd jobs. “Everybody is working hard,” Campbell said.

But none of that created any dissatisfaction.

Campbell’s loved every minute of her job so far.

“We’re coming back from such a challenging time as educators,” she said, referring to the coronavirus pandemic during an interview in the school’s gleaming new Bistro.

“Being together with colleagues in a space like this is the opportunity of a life time. We’re extremely grateful to the Commonwealth and the people of Attleboro for gifting us this.”

The Bistro is located in the Marketplace section at the front of the school where the public will be welcome to take advantage of a number of student-run businesses. It has its own entrance.

For safety, the Market Place is sealed off from the rest of the school so strangers or others can’t gain access and wander the halls.

The school has multiple safeguards throughout the building to help protect the students.

In a previous article, Campbell described the building this way: “It truly is the most spectacular school I have ever seen.”

And that flowed right into the interview with her on Thursday.

“It’s really exciting,” she said. “You can feel the positivity the staff has. This building will be alive with learning. Students will be back in business the way it should be.”

The four-story building was designed by Kaestle Boos, built by Consigli Construction, overseen by project manager Skanska USA and the city’s school building committee headed up by chairman and Mayor Paul Heroux and vice-chairman Jack Jacobi who has overseen many a building project in the city.

The Market Place businesses are all part of the CTE program in which students learn useful skills for real life outside of high school.

There are 18 programs for students and Campbell’s very proud of that. She said 92% of sophomores are enrolled in one of the CTE programs. It’s important that all students, college bound or not, get involved in CTE, she said.

“We want kids to want to come to school here and learn in a comprehensive high school,” she said.

Meanwhile, the school is divided into four “houses.”

In essence, each house is a school within the school.

The division of the school can be seen clearly from the outside and each house has its own assistant principal and administrative staff.

There’s a mix of all four classes in each house.

Freshmen and sophomores have all their classes in their assigned house for the first two years, except for some CTE classes.

“The ‘house model’ is totally different from what they had in the past,” Campbell said.

Campbell’s houseCampbell, 52, lives in North Attleboro with her husband Sean and the couple’s two sons Brendan, 22 and Jack, 20 — and three dogs.

He is the only non-family member in the business. There are eight restaurants under his supervision.

Brendan recently graduated from the University of New Hampshire and Jack is currently studying for his degree at Salve Regina University in Newport, R.I.

But Campbell said her personal family is not her only one.

“My school becomes part of my family,” she said. “It’s hard not be connected with the students. Students need adults who care about them and about who they are. It’s important that (the students) have confidence so that they can go out into the world and make it better. We want to create good citizens.”

She said her goal for the school is one of inclusivity.

“We don’t want anyone to be lost,” Campbell said. “We want everyone to be valued and feel a part of the school community.”

Campbell has taught at nearly every level, including elementary, middle school and college.

And now she’s in charge of teaching at a high school with 30 years of experience in her resume.

“I know what good teaching and learning looks like,” she said. “I feel like all the different roles I’ve had has led me to this job with the ability to do it well. I love what I do.”

And she said there’s another important aspect of her job.

“My job is to make sure what’s happening in the whole school is consistent and fair.”

Preparation for the futureCampbell said one of the goals of the new high school is not only to teach subjects, but to teach students how to learn.

“If you have learning skills you can learn anything,” Campbell said.

The new school is designed with the idea of collaborative learning in mind which is part of learning how to learn, she said.

Students will not only get knowledge from their teachers and books, but from classroom discussions and discussions amongst themselves.

There are spaces in the school carved out specifically for collaborative learning.

Campbell said learning how to learn will be key for her students because the world is evolving so fast.

“The jobs our students will have, have not been created yet,” she said.

Campbell said some students will struggle, but that’s not a bad thing because they will learn how to overcome what they don’t know and learn how to learn it.

The students Campbell has met with on tours have been “awesome,” she said.

“They have been polite, energetic, positive and enthusiastic,” she said.

And the best part is their impression of the new school.

“They were in awe,” Campbell said.

They may be overwhelmed by the size of the building at first, but it’s something to which they they will acclimate.

The new building could be described as a “shining city on a hill,” which as one definition online said is a declaration of “American exceptionalism” and a “beacon of hope.”

And the new principal seems to see it that way, too.

“This is a privilege to work and learn here,” Campbell said.