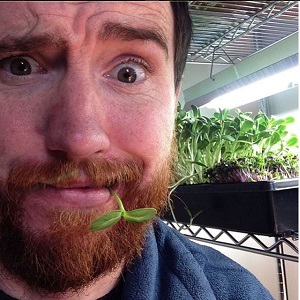 After sitting in on a free webinar and seeing dozens of people buying a course about urban farming, Nate knew he could also create and sell his own course.

Nate Dodson of MicroGreensFarmer.com began urban farming initially to take greater control over the food he was eating and to combat Crohn’s disease.

But he soon found himself growing more than he could reasonably consume, so like any good entrepreneur, he started selling his produce – and specifically microgreens.

With a little bit of effort, he was selling $400 a week worth of microgreens to farmer’s market vendors, local restaurants, and home delivery in his town.

But Nate’s little side project has absolutely exploded in the last 2 years, and it hasn’t come from selling more produce. Instead, it’s come from teaching other people how to do what he did.

Because somewhere out there someone wants to know what you already did.

Today Nate is selling $40-50k worth of his microgreens business course a month, mostly on autopilot, and he’s followed a very straightforward path to get there that anyone can apply to their own business.

Tune in to hear how he created his product, how he drives consistent traffic, the simple sales funnel he uses to convert browsers into buyers, and the changes he’s made in his business to increase his revenue to $50k+ a month.

Subscribe to The Side Hustle Show on Apple Podcasts!

Subscribe to The Side Hustle Show on Google Podcasts!

Or use the player app above to listen right in your browser.

Business is still going great for Nate, and he’s had most of his processes on autopilot for the last year or so:

How’s Business Been Going Since We Last Spoke?

“The business looks very similar to what it did back then. Not a lot has actually changed,” Nate told me.

Nate actually took some time off and allowed the business to coast. The core of his business is still his Microgreens Business Course, which has continued to sell well.

He has added one new product since we last spoke, called the MBA Microgreens Business Accelerator Course. This course is aimed at microgreens sellers already doing good business and helps them dial in all of their processes.

This is the first product Nate outsourced most of the work for. He said that was a big milestone for him, and he’s happy with how it went.

What Impact Has the Pandemic Had on Your Business?

When the pandemic first hit, Nate saw a sharp drop in sales by about half for the first 4 weeks or so.

To combat this, he put out a webinar explaining how microgreens sellers could shift their model to home delivery – which helped a lot of people boost their sales.

He also knocked $100 off the price of his course which normally sells for $497. This drove a bunch of new sales.

“It’s recovered wonderfully since then,” Nate told me.

How Are New Customers Finding You?

Nate said there are three main ways people are finding him and signing up for his course.

Whichever way they find out about his course, Nate said people land on his site and go through the same automated webinar and email responder series he’s had since 2017.

Nate said he’s noticed more competition popping up, and he’s sure there are some things he could do to improve his funnels. But as one of the first people in the space to offer Microgreens courses, he has authority in the space and business hasn’t slowed down.

For example, his Facebook group was the second Microgreens group at the time he started it. He’s now up to around 50k members, and like other areas of his business, he’s allowing it to run on autopilot for the most part.

One huge milestone Nate achieved since we last spoke was joining the Two Comma Club.

The Two Comma Club is an award Click Funnels hands out when someone using their software grows their business to the 7-figure mark.

That means Nate has now driven more than a million in sales through his Click Funnels sales funnel he’s had set up since 2017!

“Over the last year or so it’s averaged probably 15 hours a week or so,” Nate told me.

What Are You Working on Now?

Nate felt like he needed to get away from the computer and do something with his hands after running Microgreens Farmer for several years.

He has a team handling the day-to-day running of his Microgreens business. This has enabled him to pretty much remove himself from the business, and free up time to work on his properties.

For anyone interested, Nate recommends reading a book called Landlording on Autopilot. He found it extremely helpful in building systems around his property ventures.

This is still one of the two most important things Nate has done. The other important thing he recommends is to, “find someone that is doing what you want to do, and hire them to be your mentor,” Nate told me.

Which is exactly what Nate did. He hired Jacques Hopkins from TheOnlineCourseGuy.com and did exactly what Jacques told him to do.

Nate attributes Jacques in contributing to 80%-90% of all his success.

You’re in! Make sure to check your email (including spam/promotions) for your free welcome gift.